Once the program has started, you will be looking at a screen like this. 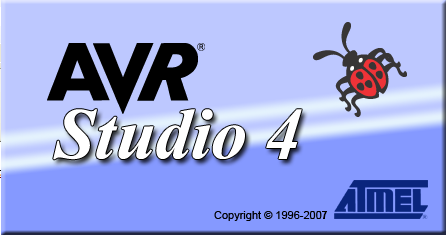 Immediately after the start, the popup window will appear. You can open an old project or create a new one. To create a new project, select "New Project". 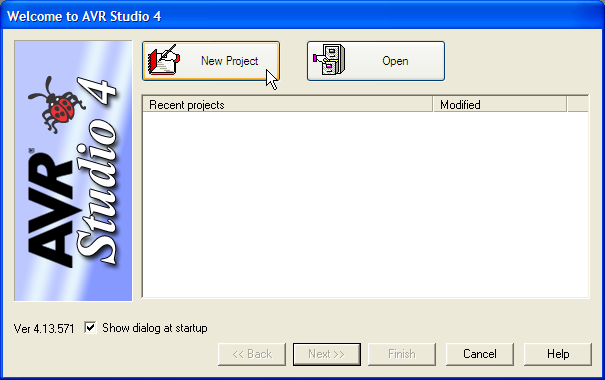 The dialog box shown in the next figure appears. In this dialog box you should enter the type of the project, its name and location. 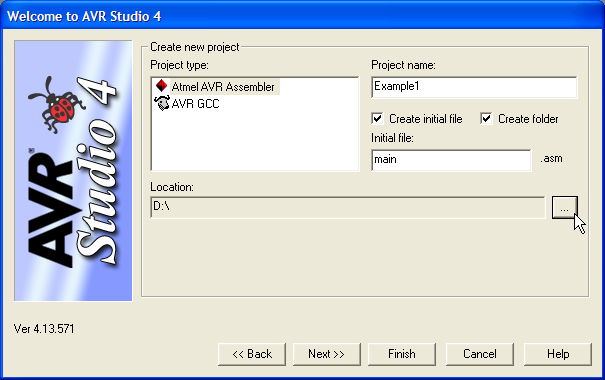 First, we have to select the Project type:

Next, we have to assign a name to our project. We choose the name Example1 here, but this could of course be an arbitrary name. Wa also choose the name of the main source file as main.asm, but this usually can be the same name as the project.

Now press the 'Next' button to continue.

You will now get the window shown below. Since we do not have an In-Circuit Emulator attached, select AVR Simulator as Debug platform. In the Device list window you select the device for which you want to simulate the code. Select ATmega168 as the device. 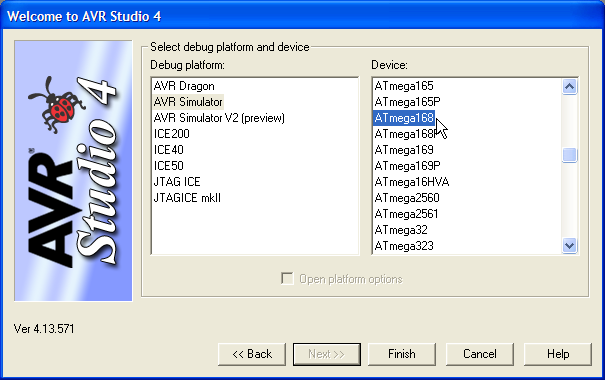 Project is now ready and full IDE window is opened. 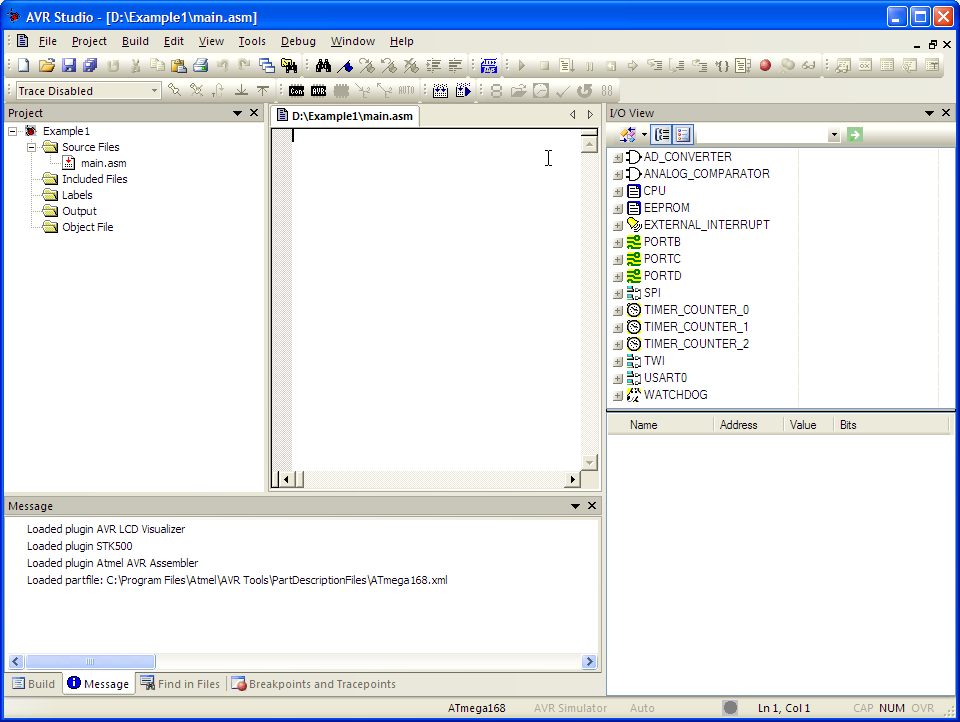 The whole project will now appear and look as shown in the figure below. In this view, you'll see all files associated with your project. It will be empty at this point. The file is empty and you'll have to manually enter the code, or you may Copy and Paste the code directly into the editor window. 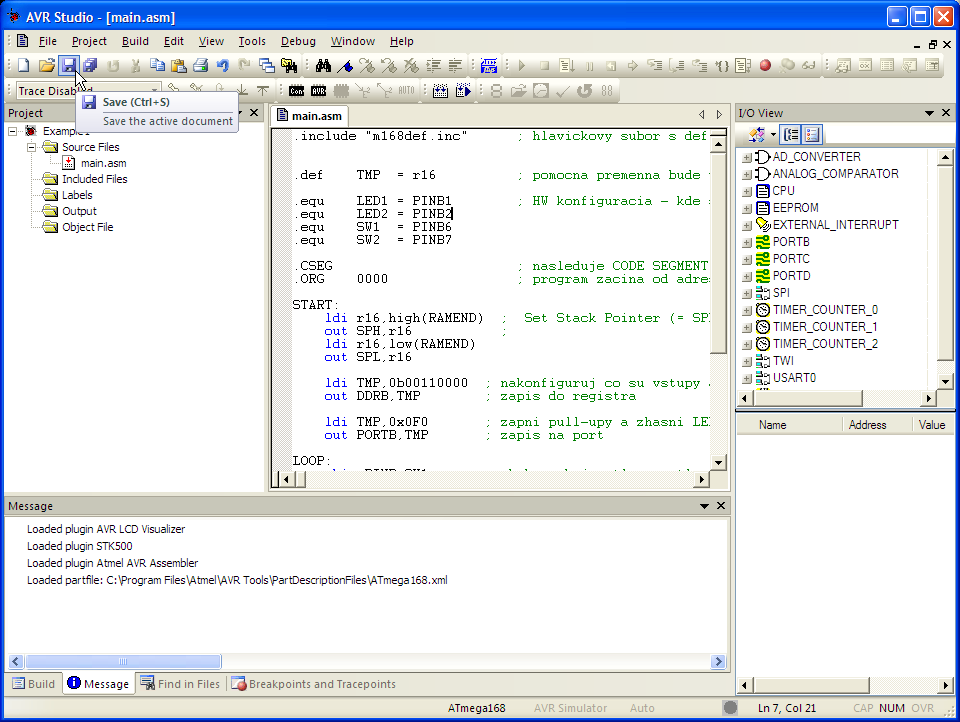 Don't forget to save Your source file befor any other operations with it!

This example requires the file m168def.inc to assemble properly. This file is the definition file for the ATmega168, and contains definitions for the microcontroller needed by the assembler.

The next step now is to assemble the file. This is done by selecting "Assemble" from the "Project" menu, or by pressing <F7>.

The "Project Output" window will show information from the assembler. From this window we can see that the code is 28 bytes, and assembly was completed with no errors.

We are now ready to advance to the next step, which is running the code in simulator mode.

At this point we have generated the files needed to simulate the code. To start running the code, select "Start debug" from the "Debug" menu, or press <F11>.

Now take a look in the editor view, you'll see that a yellow right-arrow has appeared in the left margin of the code. This arrow indicates the position of the program counter. In other words, it points to the next instruction to be executed. What we want to do now is to set up the IO views so that we can have a closer look at what is happening on the Port B and registers during program execution. Since we have selected the ATmega168 during the Simulator options setting this IO view will be opened automatically. 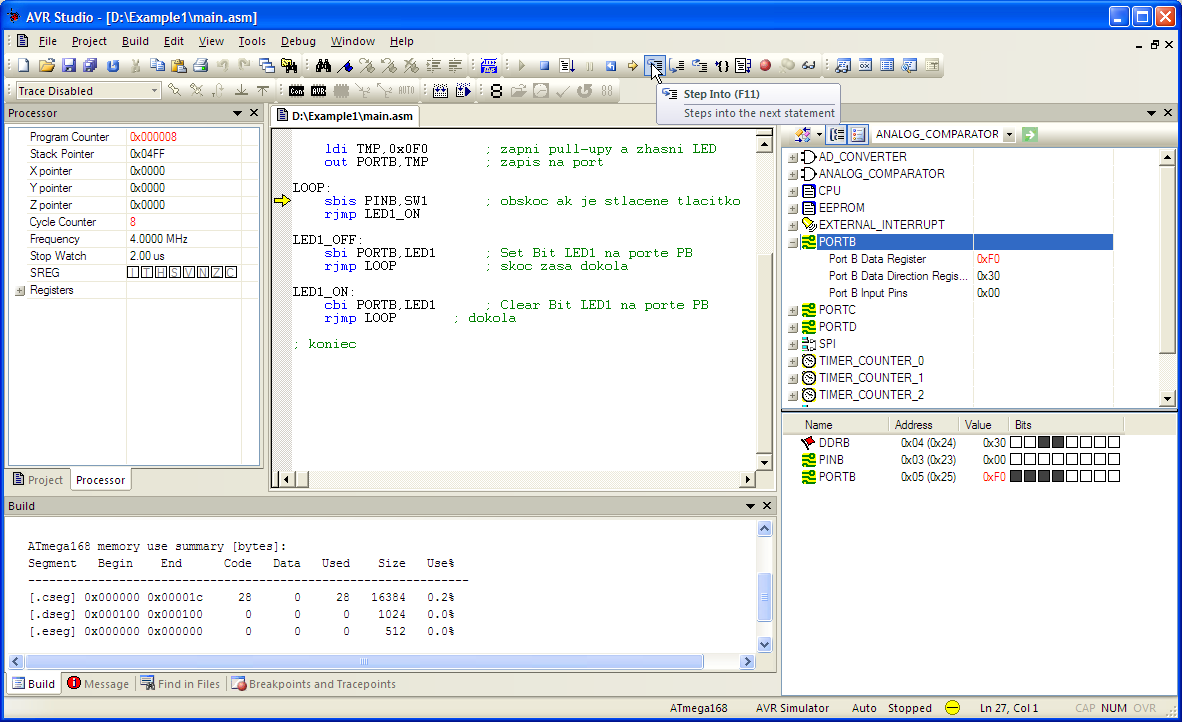 The IO Window is used to inspect and modify the contents of the I/O registers in the execution target. The standard configuration gives you a quick overview of the hardware with the ability to expand particular items for more information.

Now single step down to the last line of code (rjmp loop) by repeatedly pressing the <F11> key or by selecting "Trace Into" from the "Debug" menu. Notice how the colour changes from black to red on the registers that change value. This makes it easier to identify which registers change value on each instruction. Continue pressing the <F11> key and see how the binary value in Port B is increased.